Am I the only one having problems with the Daily Challenge?

I've been trying to get the Daily Challenge badges, so I've been playing it everyday.

But I'm having trouble with it. Sometimes it will let me play twice on the same day, sometimes the challenge only becomes available on the last minutes, the "days played in a row" is also incorrect, idk if it's just for me??

As you can see on this screenshot:
- I played on the 14th, 16th and 17th as usual
- Then I played twice on the 18th (two different maps though)
- Then on the 19th I was trying for the whole day to play the challenge, but it was still showing my score from the previous day, then it became available like 5 min before midnight and I just guessed anything to at least keep the days in a row streak
- Then on the 20th I played as usual
- Today is the 21st and its almost 9pm where I live and the challenge is still unavailable, it says I've already played and shows my score from the 20th

You can also see that it says I currently have a 8 day streak, which is incorrect since I skipped the 15th 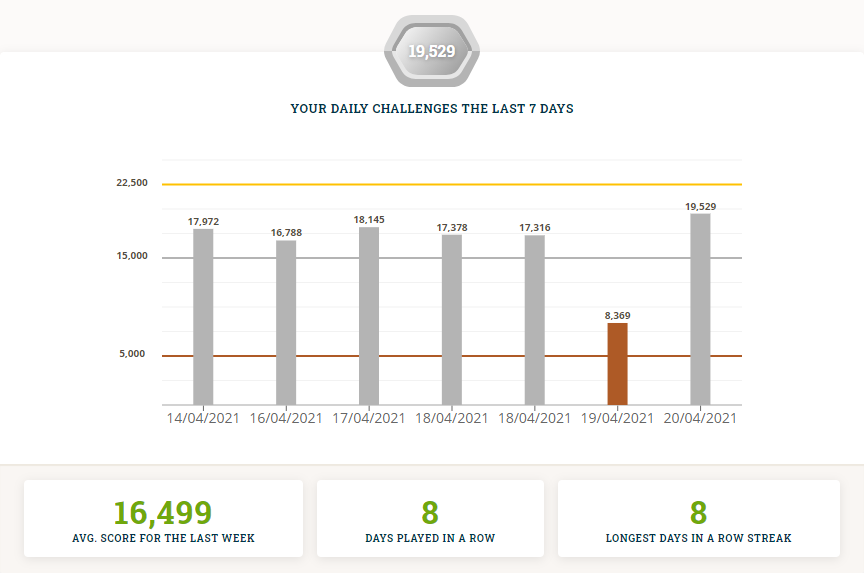 Also, at what time does it reset? i always get so lost, because it doesn't seem to be every 24h, and it's certainly not in midnight in my timezone